(Hats off to Brad Hyland for the title) 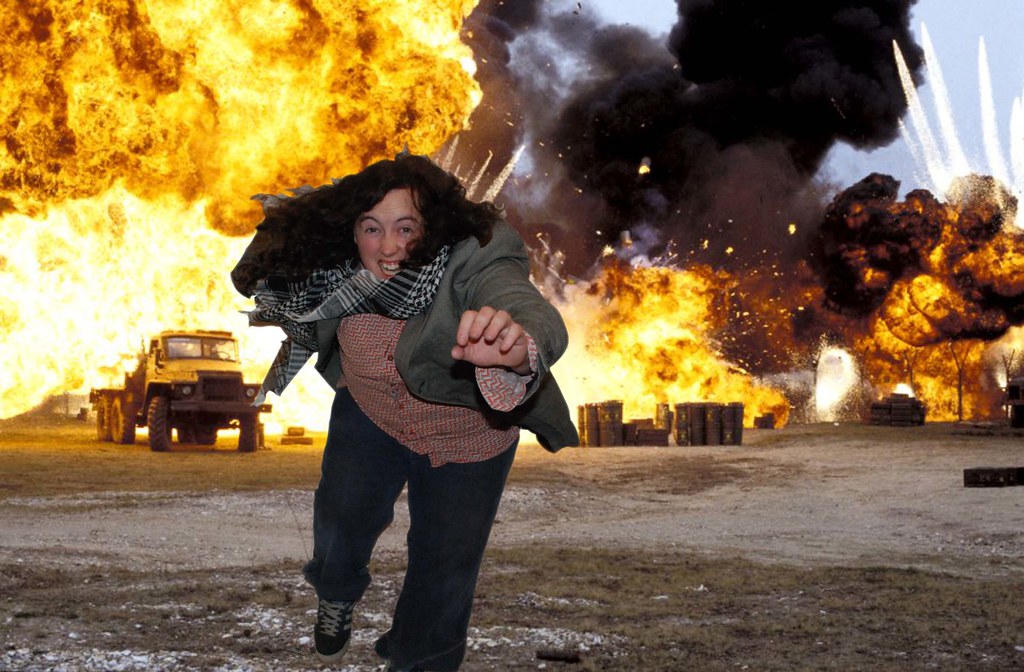 "'ACTION MOVIE' (The Explosion)" by Stephanie Hough is licensed under CC BY-NC-ND 2.0

Now, I’m a big fan of detonating things, which I'm told is a byproduct of being filled with Y-chromosomes.  But after a while, I need peace and quiet.  And a bath with Kenny G.  (Glad this blog is 100% private!)  There’s nothing wrong with an occasional concussive event: heck, I eat beans so I know what that’s all about.  I also have a 4-year-old who has a penchant for stomping and jumping, so I know.  (Aside: “Brennan, stop pile-driving your infant brother.”)

Honestly, I’m exaggerating a little bit.  After all, this is satire.  It wasn’t THAT bad.  It was about as bad as what my infant decides to do sometimes when he concentrates real hard, makes that squishy red face, and suddenly weighs two pounds heavier.  It’s not quite as percussive, but it is a little stinky.

But what do we do when we’re recording, and Joint Base Lewis McChord decides to do their delightful bombing runs?

Join me as we A) try to figure it out together, or B) throw our hands up in utter despair, and hit play on Silhouette.

The Voice Empire Strikes Back It’s such a great movie.  The Rebellion is hunkered down on the ice planet of Hoth, and their secret rebel base has been discovered.  They once again have to flee as the Empire comes bearing down on them with AT-AT walkers and, of course, everyone’s favorite: the AT-ST’s, aka “chicken walkers.”  Gotta love those cute little guys with their chicken legs and their adorable turbo lasers blowing everything you call precious to smithereens.  Awwwww.  Ultimately, the movie ends on a downward note, it being the second act of arguably the best three-part saga ever produced.  This coming from a diehard The Lord of the Rings Fan; but alas, The Lord of the Rings didn’t have chicken walkers.  If they did, I’m sure they’d have cloaks and ride on flying fell beasts while shooting turbo lasers.  It sounds implausible, but we would buy one, my precious, O yes we would!

Ah!  The Empire Strikes Back! (which has Chicken walkers). Ultimately, the empire came roaring back after their defeat in Star Wars, which, you guessed it, concluded with a massively percussive event: the explosion of the first Death Star.  *Moment of Silence for Grand Moff Tarkin and thousands of unnamed throwaway Stormtrooper Extras.*  The Empire was hellbent on making the Rebellion pay for their insolence.  And for Luke somehow managing to shoot two tiny little photon torpedo thingies down their trench thingy right into their exhaust thingy, which blew up their whole Death Star thingy.

Messing with their thingies makes the Empire thingy mad.

And that’s where we are today.  Picture me in my studio in my new home, desperately trying to record my voiceovers while navigating through strafing runs, exploding canisters of jet fuel, and napalm giving me a tan that will last until the year of our Lord 3053.  For you, it might be lawnmowers…that little rat dog across the hall…leaf blowers, or even the 747’s that fly directly over your house every thirteen seconds as they land at the airport next door.  In which case might I suggest that you get out of voiceovers and simply work at the airport since you apparently like loud noises.

What to do?  Sure, you could invest in some quality GroTheory Door Draft Stoppers to block out the noise as I did.  Or you could hire the local high school marching band to perform the best Eye of the Tiger rendition they ever have, ensuring that your bassoons, bass drums, cymbals and kicks are all pointed directly back at the offending noise source.  I mailed off my deposit check to them this morning.  Or you could buy up every last ounce of Roxul acoustic insulation.  For lasting effect coupled with revenge, you could even rent my infant and reverse-point him in the direction of the air force base right after we’ve fed him chili.  I’ll email you the rental form.  In any event, you’ll need to send a strong signal that such percussions are not to be tolerated, curse you air force base!  *insert angry shaking fist here*

The Pure Annoyance of Sounds 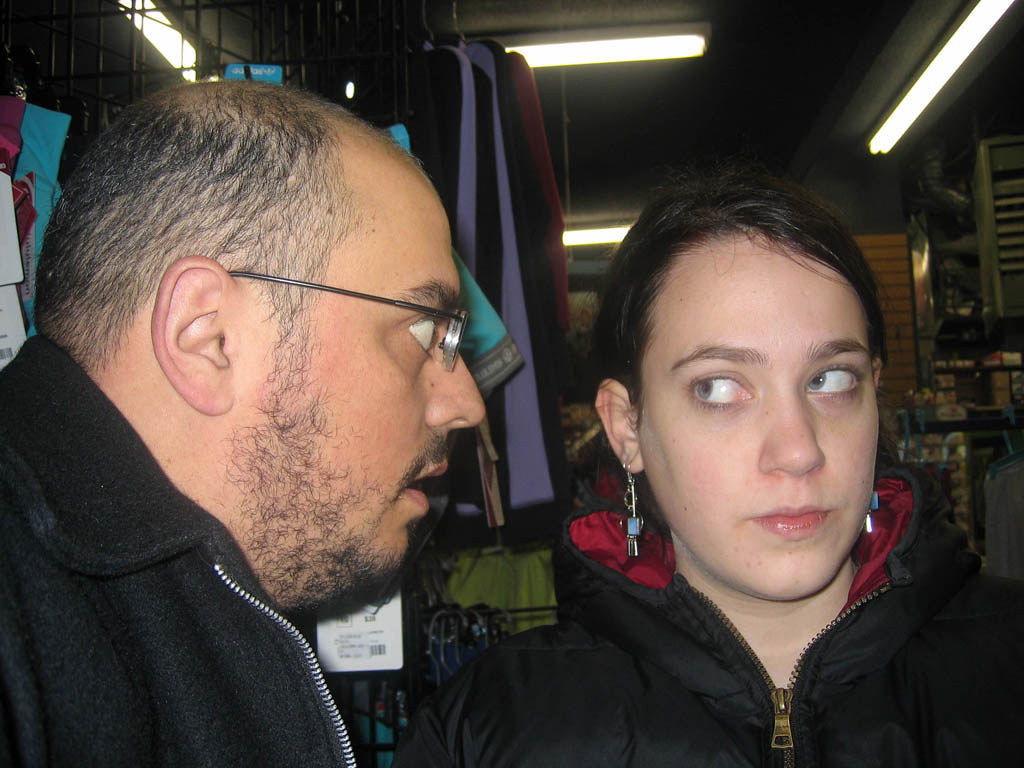 "Randi annoyed" by miguelb is licensed under CC BY 2.0

At our former residence, I faced a similar problem with an annoying yippy dog that would constantly yip (was that not clear?)  He would yip at absolutely everything, and the only thing that would bring me consolation was to run out in the road at him like a rabid charging bear, waving my arms wildly and tossing profanities at him which, in his own language, sounded something akin to “wah-wah-w-wah, wah-w-wah-wah-w-wah” as he would scamper off in fright.  This did not help things as:

Such endeavors would need to be repeated on the hour every hour.  What I found to be more satisfying was to pray for his immediate and violent death by flaming asteroid.

Additionally, I had to contend with airplanes flying over at various intervals, as Paine Field in Mukilteo was nearby.  At this point you may be asking yourself why I moved away from an airport to move close to an airport.  I will join you in this wondering after I’m finished smacking myself in the head with an oar 300 times to purge the jet engine and bombing noise out of my ears.

Ultimately, it’s not that bad.  Do I see a slight flicker on my dB meter?  Is my noise floor affected?  Yes and yes.  But not all that much.  Does my house lurch and tremble?  No.  A good solid noise gate like ReaGate by Cockos reduces the noise quite nicely!  I have no reason to fear unless for some reason a rookie pilot loses track of his practice bombing run course and decides to accidentally nuke our home.  As I brush the smoldering ashes of our new palace off of my shoulders, I will sigh, look up in the sky and ponder why we didn’t just move to some place like that little island that Tom Hanks and Wilson moved to.  It had everything: peace and quiet, coconuts, crab, fish, and lots of Fedex mail that miraculously seemed to provide everything Tom needed, including ice skating shoes and VCR tapes: two things I never leave home without, just in case I accidentally work for Fedex, accidentally crash into the sea near a remote island, accidentally have a soccer ball, and accidentally name him Wilson.

I would just need to place a call to Comcast to wire me for internet so I can reach my Voice123 profile.  And get power wired to me from across the Atlantic.  And lots of other things that are impossible to get on remote islands.

Heck, it’s better than freezing my butt off on Hoth.  And with no bombs!  At least, until the Chicken Walkers come for me.

16 thoughts on “Oh for the joy of Voiceovers and Delightful Explosions!”